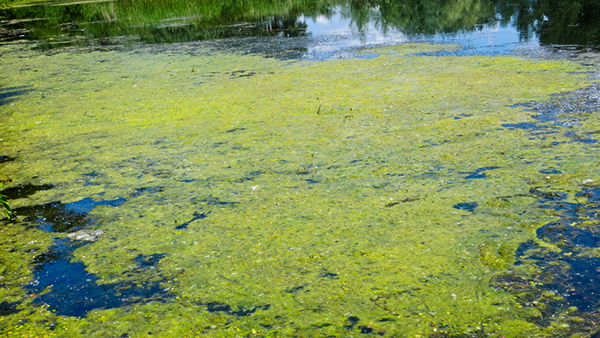 As green algae blooms in the waters of southwest Florida, local real estate professionals are preparing to take a hit. Even if the algae is not presently growing in local waters, real estate deals are falling through and, in some cases, home values are taking a hit.

One Sanibel real estate agent reported last week that a closing fell through on a $7 million waterfront home due to news reports on the algae. The waters in front of the property are still a crystal blue but, said the agent, the buyers saw a news report on the algal invasion and opted not to buy. “They backed off the purchase,” he said, adding, “I’ve definitely lost sales every year to water quality but this was the largest.”

Although algae itself is one of “nature’s building blocks” and plays a crucial role in most aquatic ecosystems, Florida’s algal blooms are becoming more of a problem thanks in large part to the very people who value the pristine water views in the area. Thanks to fertilizers and the run-off that comes with a population of waterfront and nearby residents, aquatic environments that once supported healthy levels of algae are now becoming overrun. In southwest Florida, Lake Okeechobee plays host to the algae in a particularly fertile crescent of the lake. Because the water in the lake circulates and also flows downstream over time, the growth does not remain in that crescent but spreads, reaching across the lake, downriver, and even in to the ocean.

The algae does not necessarily die when it leaves the lake, either. This is why homeowners like the ones in the report mentioned above may be unwilling to purchase properties even in untouched areas. Furthermore, the state’s consideration of a declared “state of emergency” to deal with the algal blooms makes things difficult in the tourist industry, which affects the local economy and, by extension, local housing as well.

“On one hand, we desperately need the attention to the water crisis. On the other hand, we don’t like to hear ‘state of emergency’,” general manager of Sanibel Moorings, Kari Cordisco, told the Naples Daily News. Word spreads like wildfire on internet review and travel sites also, and reports of “toxic algae” hurt local businesses like restaurants, commercial fishing operations, and crab nurseries. Crab nurseries and fish markets in the area must close if the area experiences “red tides,” caused by a different type of algal bloom from the smelly green ones that are more prevalent.

The Cost of Water Troubles

In 2015, the Florida Realtors Trade Association analyzed property values in two counties that tend to end up on the receiving end of algae-laden waters from Lake Okeechobee. The report indicated that poor water quality had suppressed property values in the area by as much as $428 million annually. Another local real estate agent predicted “a waterfront property boom in southwest Florida” with minimum 50% increase in values – if local authorities could conclusively resolve the algae issue first.