A new study shows a slight inclination for real estate investors to lean toward flipping rather than buying to rent, although investor intent varies by the type of auction and the investor’s individual profile and business model.

The nationwide survey of real estate investors bidding on properties at auction in the fourth quarter was done by Auction.com, LLC. The company said  in a release of its study  that the research provides insight into real estate investment trends on both a national and regional level. Survey data was collected from investors bidding on property online and at live events across the country and show “flipping is still going strong,” according to the release.

The findings for the fourth quarter reveal a slight propensity toward flipping among investors overall, although investor intent varies considerably by the type of auction (live event versus online auction) and the investor profile, according to the release.

Survey respondents who indicated that they were making a one-time purchase preferred a hold-to-rent strategy, while respondents identifying themselves as full-time “real estate investors” and those indicating that they were working on behalf of another investor favored flipping.

“It’s probably not a coincidence that some of the highest priced markets, such as California and the Northeast, are seeing more flipping activity, since higher priced homes are more difficult to rent out profitably,” Auction.com Executive Vice President Rick Sharga said in the release.

“But it’s also very possible that part of the reason we’re seeing an increase in flipping is that in many of these markets there’s simply not enough new or existing home inventory to meet buyer demand. That spells opportunity for real estate investors who can buy, fix and flip a property quickly and efficiently.”

Investors bidding at live events appear to be more likely to flip the properties they purchase based on survey responses collected in the fourth quarter of 2014, with respondents indicating a preference toward flipping over holding to rent in every state where Auction.com conducted live events. Of the states represented in the survey, the widest margins occurred in the West and Midwest. 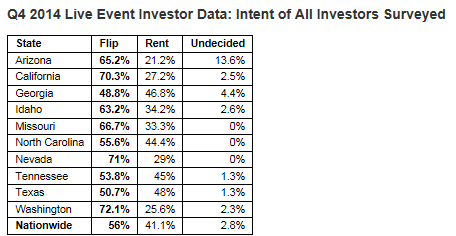 Conversely, responses given at online auctions in the fourth quarter of 2014 show that investors bidding online generally intend to hold the properties they purchase. This was true in three of four regions, with the exception being the Northeast.