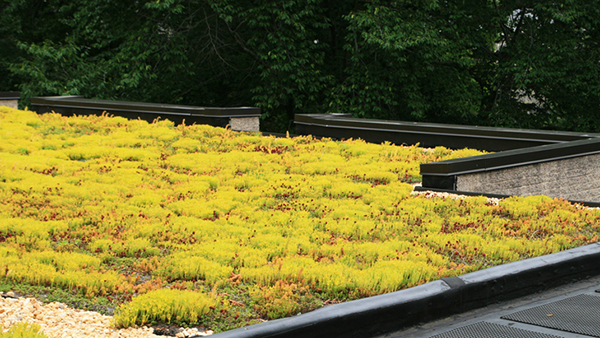 It was a hotly contested ballot initiative in Denver, but environmentalists won their battle for “green rooftops” in the last election. The Green Roof Initiative passed with 54 percent of the vote, and was certified on November 24. Although Denver is not the first city to adopt a mandate for rooftop gardens on larger buildings, the Associated Press says Denver’s requirements are some of the most stringent.

In addition to rooftop gardens for new buildings, Denver is also requiring the retrofitting of many older buildings. The retrofit would take place when the old roof needs replacing. Buildings that can’t support the weight of a garden would be exempt.

Buildings that are 100 percent solar and multi-family buildings with four or less stories, would also be exempt. There would be other exemptions as well. As one report put it, “There would be plenty of fudge room.”

The Green Roof Initiative website lists several ways that green roofs will benefit building owners, and the city in general, including a reduction in Denver’s “heat island effect.” That’s when temperatures in the city are higher than the surrounding rural areas. Denver reportedly ranks 3rd in the country for worst heat island effect. It also ranks 11th for poor air quality.

The heat island effect is created when rooftops, pavement, and concrete absorb heat in the afternoon, and raise the ambient air temperatures throughout the night. The Denver Post cites a Climate Central report that said Denver’s average summertime temperature have been almost 5 degrees Fahrenheit higher over the last 10 years than areas outside the city limits.

The mandate will help reduce the heat island effect by covering up some of the heat-trapping material on rooftops, and replacing it with vegetation. Advocates say, the rooftop gardens also benefit the city and building owners in several other ways including increased energy efficiency from the insulating effect of the gardens, better control of storm-water runoff, and roofs that last much longer than traditional ones.

The website writes about the benefits to building owners. It said, “These required building improvements would significantly reduce long term operating costs by lowering energy consumption and increasing the longevity of a roof.” It continued, “A green roof lasts two to three times as long as a traditional roof because the waterproofing membrane is protected from damage by the elements and workers by covering it with a growing medium and plants.”

They are not cheap however. They cost about $15 more per square foot than a traditional roof. But advocates say the green roof will pay for itself in about six years due to energy savings and a longer-lasting roof.

Despite the benefits, they say without the mandate developers will often choose “not” to incorporate a green roof because they don’t take long-term savings into consideration. They are simply building the building and selling it.

The initiative was endorsed by several environmental groups and green builders but there was plenty of opposition. The Denver Post reports, opponents spent at least $250,000 trying to defeat what they see as a very costly requirement.

The high-dollar value of the opposition campaign was not enough to defeat the bill however. Advocates had only raised about $21,000 so there was substantial support for its passage.

The opposition was made up of companies and individuals from the Colorado Real Estate Alliance. The Post reports, opponents see the initiative as a “noble goal,” but builders and property owners will be footing the bill. They say it should be optional and the government has no business making it a requirement.

The mandate goes into effect on January 1 of 2018, so the city is scrambling to prepare policies and procedures, and many developers are trying to figure out what they must do. Kathy Barstnar of NAIOP, a commercial real estate association, said in the Denverite, “A lot of developer members are reaching out, asking what they should do.” She said, “We can only encourage them to get their plans in before the end of the year.”

The initiative calls for the creation of a technical advisory board so that should help with the mandate’s implementation. University of Colorado assistant professor, Leila Tolderlund, also offered some advice in the Denverite article. She said, “There really are a lot of pre-made modular green roof systems that meet the minimum requirements.” She added, “There is no need for anxiety.”

If it’s determined the ordinance isn’t working the way it should, the city council can make changes with a two-thirds majority vote after it’s been in effect for six months.

To read the original article or listen to the podcast, click here.