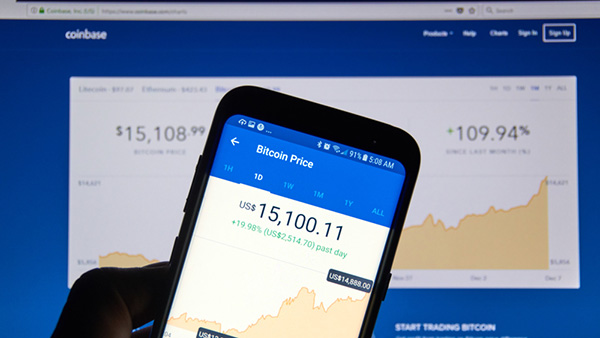 Digital currency marketplace, Coinbase, is celebrating a partial victory in its fight to keep Uncle Sam out of customer accounts. A broad ranging request for user account information has been reduced to a fraction of the original request with far fewer pieces of information.

Crypto leader Bitcoin has grabbed the public’s attention this past year. As we just reported in another podcast, Bitcoin value has skyrocketed from around $1,000 in January to about $11,000 today with some wild fluctuations.

Although that volatility puts those profits at risk, it’s those gains that have snagged the attention of the IRS. With such a high multiple in value, some people have made “tons” of money, and it appears many haven’t reported that as income to Uncle Sam.

Of the millions of accounts in Coinbase, the judge is now requiring that Coinbase supply information for just 14,000 high-value users. Those are people with more than $20,000 in transactions for the 2013 to 2015 period.

According to a Futurism blog, court documents show just 800 to 900 of those 14,000 account holders had reported profits on their taxes for those years. With the exponential rise in Bitcoin prices, that might indicate that at least some of those other account holders also made money they didn’t report to Uncle Sam.

The IRS made an initial request about a year ago for information on all Coinbase account holders. The agency also wanted extensive information about each customer including complete user profiles, transaction logs, records of payments, correspondence between the users and Coinbase, and other personal information.

The court narrowed that list down to a person’s taxpayer ID number, name, date of birth, address, transaction logs, and account statements. Nothing else. The court said the other was “not necessary” and that information will only be requested from people who’ve bought, sold, sent, or received more than $20,000 in Bitcoin or other cryptocurrencies.

On the , the director of communications, David Farmer, said he had hoped for a complete victory but is still proud of two things. First, he said, “The government has narrowed the scope of its summons.” And second, “The quantity of data we must produce for the approximately 14,000 customers who remain in scope has been significantly reduced.”

Farmer says that the IRS isn’t used to fighting for the right to look at customer account information. He says companies typically just hand agents the records. In this case, Farmer says Coinbase succeeded at protecting almost 500,000 customer accounts from IRS disclosure.

Coinbase said on the blog, it’s still reviewing the court order before it discloses information on its highest-transacting customers. It says, it plans to notify users before any information is disclosed.

The company’s membership base has also grown into the millions. The company says it has more than 13 million users today. Many of them are just dabblers who are investing out of curiosity.

Predictions on Next Cryptocurrency Leader

Meanwhile, digital money goliath Bitcoin may not be the leader forever. It’s rise to prominence has sparked the creation of many other cryptocurrencies, and some may be headed for market dominance.

A blog, on the website How Stuff Works, predicts that Ethereum could be the next winner because of the way it operates. It says, Ethereum isn’t just a cryptocurrency with a blockchain infrastructure, it’s also a substantial platform for building applications that run on blockchain. Both Bitcoin and Ethereum have their own programming languages, but, the blog says, Ethereum is more powerful, with the ability to be more secure.

Ethereum trails Bitcoin value by the thousands right now. At last check, Ethereum was $470 to Bitcoin’s $10,976.

Both are high risk when it comes to investing. Their values are based on popularity and not on anything concrete. Cryptocurrency has risen to great heights from absolutely nothing. So, beware of jumping in with both feet. That toe in the water may be just as satisfying, and a lot safer financially.

This article was originally published on the Real Wealth Network on December 5, 2017. Read it here.