All About Action | Think Realty | A Real Estate of Mind 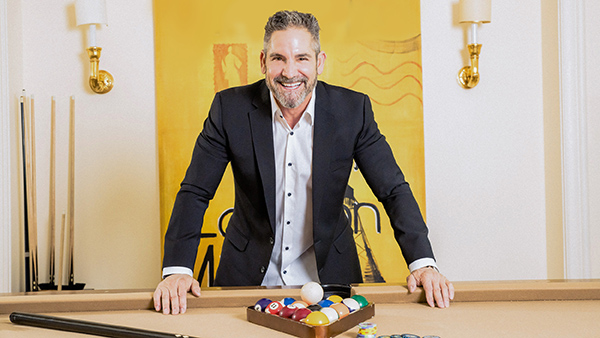 If you’re not one of Grant Cardone’s 2.9 million Instagram followers, you’re missing out on business tips, sales strategies, real estate advice, and so much more. Known for his dynamic personality, this real estate mogul and multi-business owner has a way with words that might just leave you feeling inspired to close your next deal and take your business to the next level—or even multiply its growth by 10.

Cardone is founder of the 10X Movement—a platform launched by his book The 10X Rule in 2011 and the 10X Growth Conference in 2017—in which he teaches and trains entrepreneurs to grow their business, their income, and their life—tenfold. His passion to help others permeates off the stage—and the page—as he shares insights, tips, and thought-provoking strategies for success, which according to Cardone’s definition, is ultimately each person’s individual duty.

For Cardone, success is not an option, it’s an obligation.

“Learning from failures is not an option. I measure success by what can I DO, how I can contribute, and how I can be an example for others,” he said.

Talking with Grant Cardone is like reading a book of daily affirmations and deep thoughts, while at a bootcamp to becoming your best self. But he puts more priority on his actions than his quotable quips. Throughout Cardone’s seven companies, he employees nearly 500 people. And it’s what he does day after day that proves to be the key quality of a leader.

“DOING is the number one, two, three, four, and five reasons of being a leader,” he said. “And, have an opinion on everything!”

So, just what has Grant Cardone done? Well, a lot—of everything.

Getting the Jobs Done

Cardone is a New York Times bestselling author and internationally renowned sales trainer and speaker specializing in leadership, real estate investing, entrepreneurship, social media, and finance. He has been investing in multifamily real estate since the mid-1990s. With over 8,000 apartment units and a short-term goal of attaining 20,000 units, Cardone has demonstrated decades of discipline in work, life, and leading others.

His professional portfolio is beyond diverse; his titles include sales expert, entrepreneur, trainer, speaker, educator, author, real estate investor, commentator, philanthropist, and social media influencer. Regardless of which hat he’s wearing, he knows what he’s good at. He said, “If I don’t excel at something, I dump it.”

For example, he might not be good with details and organization, but it’s no secret he has exceled at real estate investing, and his focus has been on affordable, income-producing multifamily housing.

“Real estate is so good to my family, knowing I’m taking care of them with indestructible investments is rewarding.”

But multifamily is not the only asset class he pursues. He said he is looking hard at retail and office because he believes there is opportunity.

“Where there is so much bad news, there has to be opportunity. Plus, people will still need to go to doctors’ offices! And, you can’t buy everything on Amazon!” he said.

Before becoming successful in sales and investing in real estate, Cardone tried his hand at many entry-level gigs, all of which ended with the door closing behind him. Not unlike many young people trying to find their way, Cardone was lost and unhappy with himself. That mindset became a mirror, reflecting negatively on every aspect of his life. Cardone’s story is not a straight line to Easy Street, but the best stories never are.

Cardone was fired from his first five jobs. From fast food and retail to a refinery, he not only struggled to keep employment, he struggled to keep clean. Cardone had a drug problem and a reputation for being trouble. As a twenty-something, he had turned himself into a terrible example.

One of five children, Cardone lost his father when he was ten. Having only one parent, no matter how great she was, was not enough. Going through that extreme loss as a child eventually ignited a fire toward greatness, but it took ten years to turn it around.

“I stood in the unemployment line at 23 years old. My uncle asked what I was doing there. I said I was there to get a check. He said you didn’t go to college to be in that line. I got out of that line and went and got a job. Life is hard with money. It’s almost impossible without it,” Cardone said.

So, he started selling cars at 23 and stuck with it for more than six years.

“I hated it,” he said. “But I committed to doing something I hated and decided to become great at it. I couldn’t get another job. Part of why I hated my job was because I hated myself. No one was more disappointed in me than me.”

When he was 25, Cardone went to rehab.

“What turned it around for me was looking in the mirror for 10 years (from the time I was 15 to 25) and just being disgusted. I became more disgusted with my choices, my drug addiction, my results from my actions. I got sick and tired of being sick and tired. One day, after 1,000 attempts, I started changing. I flipped my obsessive quality and addiction to productivity and making a difference. I am proof of the American dream; you can turn it around. You can be a good example even if you were a terrible example,” he said.

In hopes of becoming the mentor he needed during his formative years, Cardone started The Grant Cardone Foundation, a nonprofit organization devoted to helping underserved and at-risk kids by providing mentorship and financial literacy. According to the foundation’s website, “the statistics of fatherless kids are undeniable. Kids without dads are more likely to be poor, involved in drugs and alcohol abuse, drop out of school and suffer from mental and emotional problems.”

Cardone is an example of a “good kid raised in a good family that turned bad” because there was no father figure for guidance and discipline. He credits the men in his life, like his uncle who guided him out of that unemployment line, for stepping in and showing him direction and purpose.

Now, his direction is nothing but upward. Cardone’s annual 10X Growth Conference (prior to the pandemic) attracted thousands of attendees wanting to learn about entrepreneurship, leadership, marketing, motivation, and more. It is a conference for those who want to improve their businesses and every aspect of their lives. With A-list entertainment and elite presentations from hand-picked experts and educators, the event itself has been a showstopper. And, the show is set to go on next year as planned.

The 10X conference is just another way Cardone can reach people and make a difference in their lives. For him, touching more lives is the one to-do on his list that will never be crossed off.

“Reaching more people and making a difference is my want and my why. I can’t help everyone because not everyone wants help, but I want to influence enough people to consider my life significant. I have to be noisy to get heard. People either like me or they hate me. I only worry about the ones that don’t hear me,” he said.

In the world of real estate, the phrase exit strategy is often spouted as a means to get out of a deal when the time is right. But when is it time to exit a career that is so far-reaching and so fulfilling? For Cardone, there might never come a time to exit; rather, he hopes to leave a legacy that will live on to affect future generations.

“My legacy is what people will say about me when I’m not around anymore,” he said. “My body can’t live forever, but my contributions can. My dad was a good man who influenced the small town we lived in, but I want to influence more people. I want to share educational tools that last. Businesspeople can make impacts forever—like Rockefeller and Carnegie. Their names are still used and what they did is still talked about.”

The biggest thrill for Cardone is giving back and helping people, especially those he doesn’t know. For example, he tells investors, “Invest in yourself first, your business second. Then, if there’s money leftover, invest in something that can’t be destroyed. I’m not a risk taker. I make big bets on diversified assets. Multifamily is an indestructible wealth vehicle that has proven itself for hundreds of years.”

Time will tell if Cardone will be the same.